END_OF_DOCUMENT_TOKEN_TO_BE_REPLACED

Since moving to Los Angeles in 2013, we’ve eaten a lot of tacos. There aren’t a lot of places where we’ve returned to eat twice, but one place I like is Lotería Grill—specifically their location at the LA Farmers Market. It has a taco stand feel, the hustle and bustle of an open air market, a whimsical lotería board wall and the tacos I’ve eaten there are consistently good. I recommend this taco de carnitas, pictured below, which is made with Michoacan-style carnitas, salsa de chile morita (which is really not that spicy—although it says spicy on the menu—but is perfectly smoky), and is garnished with a slice of avocado, onion and cilantro. A few weeks ago I enjoyed lunch here with some girlfriends and couldn’t resist snapping a few photos to share. 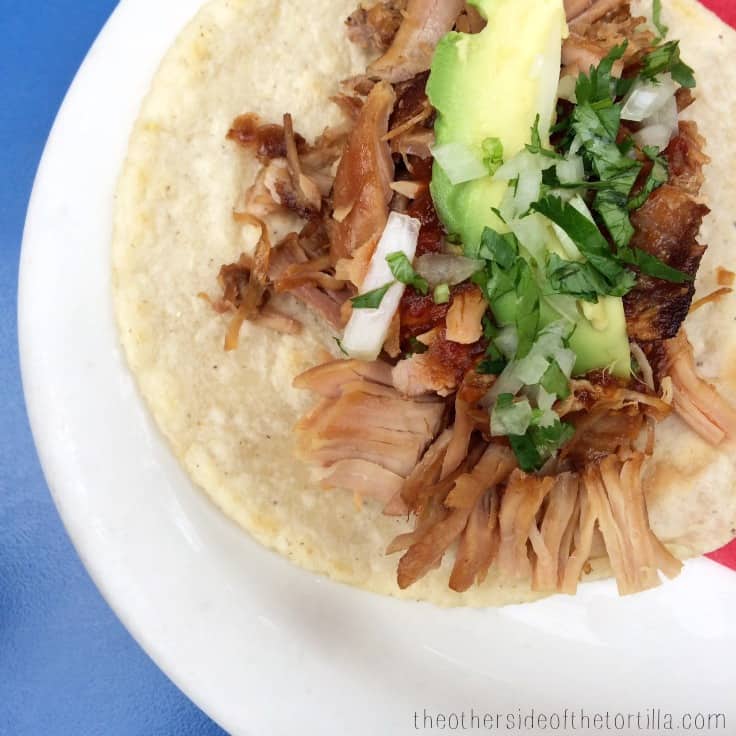 END_OF_DOCUMENT_TOKEN_TO_BE_REPLACED

Quick and easy meals for weeknights are essential in most households, mine included. But if you’re like me, you still want to put something at least semi-homemade on the table to please your family at dinnertime. Longaniza en salsa verde is one of my go-to dishes that’s both easy and quick to make and can also use homemade or store-bought ingredients depending on how much time you’ve got to cook. 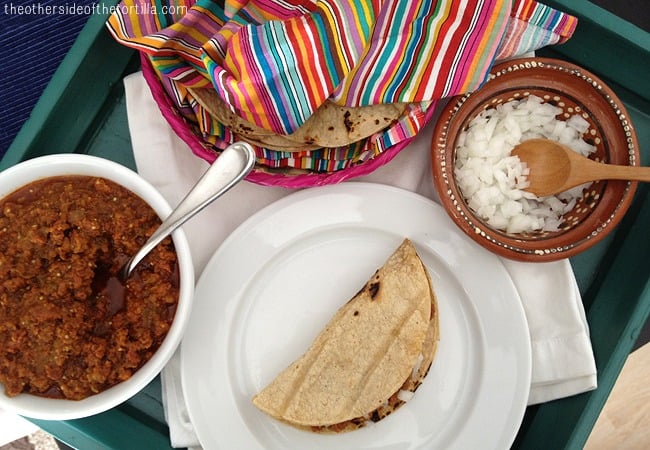 If you have the time, you can make my salsa verde recipe from scratch (but I suggest that you leave out the salt until after it’s cooked; longaniza can be rather salty so you may find you don’t need to add any salt in the salsa). If you don’t have time to make the salsa, you can use your favorite brand of store-bought salsa verde. I often serve this dish with a side of black beans diced onion and chopped cilantro as garnish….

END_OF_DOCUMENT_TOKEN_TO_BE_REPLACED

I haven’t written much here about my favorite taquería in Chicago, La Lagartija, but have always widely recommended the place to anyone who asked me in person, on Facebook or Twitter about where to get an authentic Mexican meal in my hometown. I wasn’t exactly trying to keep it a secret, but it’s definitely a gem and I always appreciated the neighborhood charm and the way that the meseras and owners always remembered us and greeted us like family. I have so many photos of memorable meals we ate there, and it was the only place in Chicago where we’d regularly eat tacos al pastor.

But one of my favorite standby meals there, the alambre, is both succulent and super easy to recreate at home. This recipe is my own spin on one of their alambres. The owners are from Mexico City, and the dish on their menu is actually a version of a popular dish at one of our favorite taquerías in Mexico City, El Charco de las Ranas. This dish is also sometimes known as alambre de chuleta and is best served with warm tortillas, but you can skip the tortillas if you like and just eat it with a fork.

END_OF_DOCUMENT_TOKEN_TO_BE_REPLACED

Because we love you, and because October 4 is National Taco Day, here are some of our favorite taco recipes from The Other Side of The Tortilla and our friends.

See below the slideshow for the links on where to find each of these 10 recipes that will make you say “Que rico.”

END_OF_DOCUMENT_TOKEN_TO_BE_REPLACED

I’m always on a quest for a good taco in my city, and thanks to the fact that there are tons of Mexican immigrants here, it’s not too difficult to seek out the best changarros for the most authentic tacos.

A few months ago, my friend Steve told me he knew this awesome place for tacos. Given that I have an incredibly high standard for what meets my expectations for a “good taco” or an “awesome taquería,” I usually nod and say something nice when someone tells me they had a good taco somewhere. My circle of trusted taco advisers is admittedly small. Yes, I’m a self-admitted taco snob. I bet you are, too.

But he was persistent about these tacos inside a little Mexican grocery store in his neighborhood. I’d been there before because I liked the butcher but the produce wasn’t great, so I didn’t shop there very often. And I knew I’d eaten at the taquería inside the store but I couldn’t say that I remembered it one way or the other. So we went out one Saturday morning for tacos with Steve to give it a shot.

This was the taco I ate. (OK, I ate more than one…) Mmmm, carne asada.

While not perfect (I’m not a fan of the double tortilla, for starters, and their salsa was a bit weak for my taste), I can’t list any other complaints because this taco de carne asada really hit the spot.

Two other factors won me over this time, despite being underwhelmed by my previous experience eating here. First, they’ve renovated and expanded the eating area so it’s no longer terribly cramped trying to eat lunch there (which can get pretty busy). And second, although they’ve usually got several different kinds of aguas frescas to choose from, the grocery section sometimes carries glass bottles of Yoli, a beloved Mexican lemon-lime flavored refresco. I admit I’ve been back there several times just looking for Yoli and have grabbed a taco on my way out.

There are plenty of other tacos on the menu, of course, and we’ve tried most if not all of them. José really liked the cecina. But I personally only return for the carne asada.

Over the weekend José and I had dinner at Fogón, an upscale Mexican restaurant that opened this spring in a neighborhood near where we live. I’ll write more about it another time, but I had to share a photo of this earthy-tasting, perfectly over-stuffed quesadilla I ate as an appetizer—it had cheese and huitlacoche (also known as corn smut or corn truffle), epazote, salsa rustica with black beans and was topped with a small dollop of creme fraiche and light greens. It’s the culinary equivalent of black gold! (More on the topic of huitlacoche soon, I promise!)

I ate this incredible taco de cecina last week at La Lagartija Taquería here in Chicago, our favorite changarro. With a homemade tortilla, a light smear of frijoles and a perfectly salted cut of cecina, I was in taco heaven. I topped it with cebolla, cilantro and a drizzle of salsa roja. It’s not on the everyday menu (it was off the daily specials list), but it most definitely should be! If you haven’t had cecina before, it’s a salted and partially dried thin cut of beef (kind of like how some steak houses serve dry-aged steaks).

I’m not about to challenge his ruling (after all, he is the king of carnitas), and though I’ve not eaten them in every state yet, I will say that Rincón Tarasco has the best carnitas I’ve ever eaten in my life.

Be sure to get there plenty early, though, or else risk them having nothing left but riñones. They’re only open until they sell out of everything and then they close to prepare for the next day all over again.

Those truly dedicated to their carnitas know to show up around 10 a.m. to have the best pick of available meat. They’re closed on Tuesdays.

Yesterday for a late breakfast we drove all the way to José’s favorite place for carnitas, only to find that all they had left were maciza (the “white meat” with no fat or bone), hígado (liver) and riñones (kidneys) – which was not exactly what we were hoping to eat. Unfortunately, when you arrive later in the morning, you risk them running out of the best parts. So we turned around and headed back to the car and resolved to show up earlier another day.

We hadn’t eaten breakfast in anticipation of eating carnitas, so we were starving. The friend we brought with us recommended another taquería not too far away called El Borrego Viudo, or The Widowed Sheep, which is supposedly one of the best taquerías in Mexico City, especially after a night of drinking.

There are only seven items on the menu: al pastor, suadero, longaniza, sesos, lengua, cabeza and tepache (a drink made of fermented pineapple and sugar).

We stuffed our panzas with tacos de suadero, longaniza and al pastor, and drank an apple-flavored soda called Sidral Aga. According to Chilango magazine, it’s the taquería’s red salsa that people love the most but the truth is that José and I didn’t think it was anything phenomenal. What was phenomenal though was the longaniza, which was perfectly spicy and not greasy at all….