I’m always on a quest for a good taco in my city, and thanks to the fact that there are tons of Mexican immigrants here, it’s not too difficult to seek out the best changarros for the most authentic tacos.

A few months ago, my friend Steve told me he knew this awesome place for tacos. Given that I have an incredibly high standard for what meets my expectations for a “good taco” or an “awesome taquería,” I usually nod and say something nice when someone tells me they had a good taco somewhere. My circle of trusted taco advisers is admittedly small. Yes, I’m a self-admitted taco snob. I bet you are, too.

But he was persistent about these tacos inside a little Mexican grocery store in his neighborhood. I’d been there before because I liked the butcher but the produce wasn’t great, so I didn’t shop there very often. And I knew I’d eaten at the taquería inside the store but I couldn’t say that I remembered it one way or the other. So we went out one Saturday morning for tacos with Steve to give it a shot.

This was the taco I ate. (OK, I ate more than one…) Mmmm, carne asada. 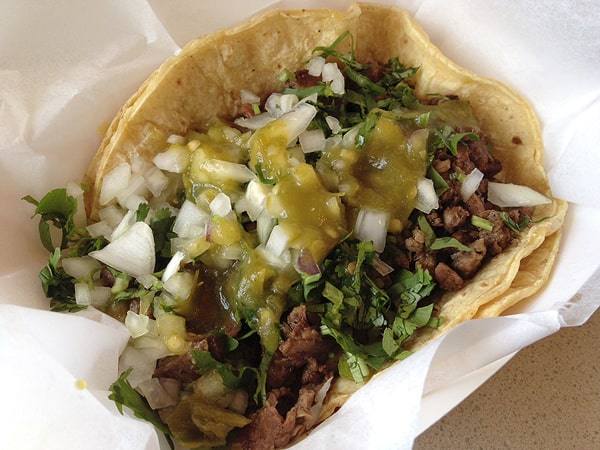 While not perfect (I’m not a fan of the double tortilla, for starters, and their salsa was a bit weak for my taste), I can’t list any other complaints because this taco de carne asada really hit the spot.

Two other factors won me over this time, despite being underwhelmed by my previous experience eating here. First, they’ve renovated and expanded the eating area so it’s no longer terribly cramped trying to eat lunch there (which can get pretty busy). And second, although they’ve usually got several different kinds of aguas frescas to choose from, the grocery section sometimes carries glass bottles of Yoli, a beloved Mexican lemon-lime flavored refresco. I admit I’ve been back there several times just looking for Yoli and have grabbed a taco on my way out.

There are plenty of other tacos on the menu, of course, and we’ve tried most if not all of them. José really liked the cecina. But I personally only return for the carne asada.