My fresas con crema popsicles are some of the most popular paletas on the blog, and with good reason: they’re the perfect way to enjoy summer berries! I created this version with mixed berries a few years ago and loved the way it came out. It’s similar, but different enough that you get a different flavor palate with all the berries. 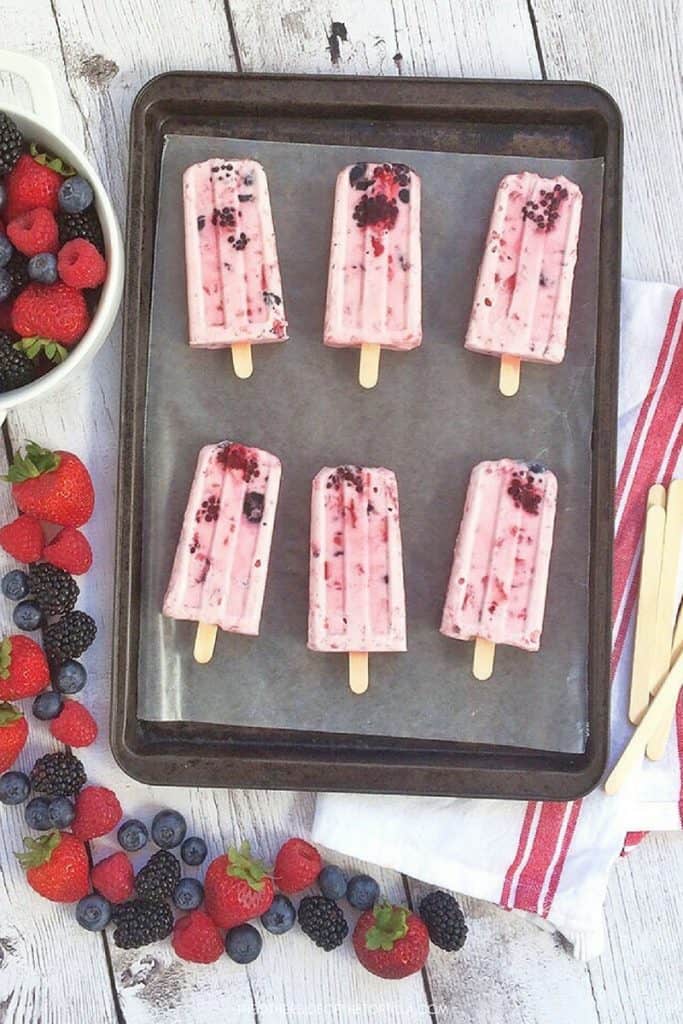 The best way to get these berries to bloom with flavor is to macerate them. Similar to the way I macerate sliced strawberries with sugar for my fresas con crema popsicles, we’ll macerate the berries in this recipe, too, with one key difference.

It’s essential to break some of the blackberries, blueberries and raspberries while macerating them, otherwise you won’t get much berry juice. I gently break the berries with a potato masher, but you can also use a fork or other kitchen tool. Remember: you want broken berries that will hold their shape, but ooze some juice. You don’t want berry pulp.

A couple of acknowledgements here: Blueberries are not all that common to find in some parts of Mexico, despite the fact that Mexico grows a lot of the blueberries eaten in the U.S. If you’re not a blueberry-lover, you can sub in more blackberries (called zarzamoras in Spanish).

These popsicles are heavy on the dairy, and they don’t translate well with coconut cream (vegans and non-dairy folks who like to make substitutions, be warned, you won’t get the same results). If you don’t eat dairy, I’d suggest making strawberry hibiscus popsicles instead to avoid tummy troubles. And if you REALLY like blackberries and can tolerate sweetened condensed milk, you might want to try my Oaxacan horchata popsicles, which have blackberries and cantaloupe in them—just like you’d float on top of the drink.

During the warmest months of the year, I suggest freezing these berries and cream popsicles completely overnight before serving so they aren’t quick to melt in the heat.

You’ll need a few things to make this recipe: 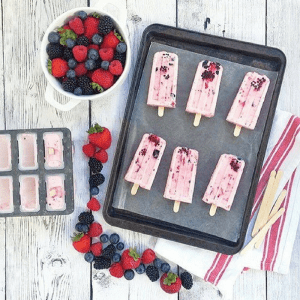 Similiar to the popular fresas con crema dessert, this version uses a mix of summer berries for a spectacular berries and cream popsicle you'll make again and again.

To remove popsicles from mold, gently run lukewarm water over the bottom edges of the popsicle mold for a few minutes to loosen them.

If you want to cut some of the fat and calories, you can substitute regular whipping cream for the heavy whipping cream without losing much of the creamy taste.

If you’ve ever struggled with finding a ripe avocado in the grocery store, here are my foolproof tips to make sure you never buy unripe avocados by mistake again. 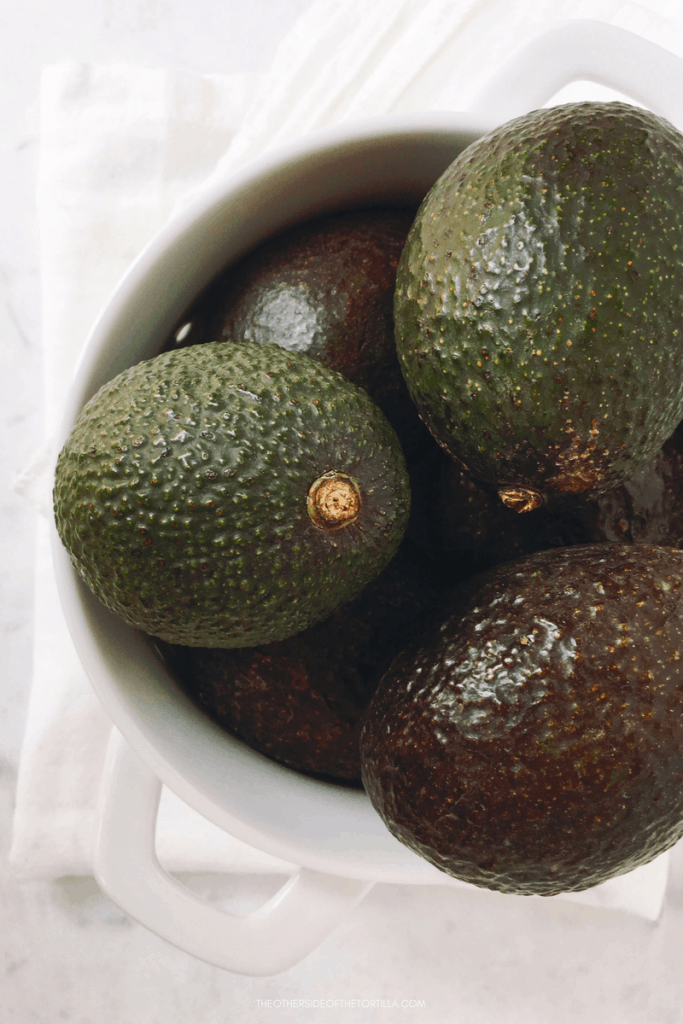 Avocado is a very versatile ingredient in Mexican cuisine. And although most people think of avocado just as a savory ingredient, you can use it for sweet recipes, too. Aside from typical recipes like guacamole and salsa verde with avocado, this fruit is also great for making avocado paletas, avocado fudge pops, and avocado chocolate pudding.

With so many potential uses, you’ll want to ensure you always have avocados on hand. But when it comes to choosing a ripe Haas avocado, there are a few cardinal rules to follow.

END_OF_DOCUMENT_TOKEN_TO_BE_REPLACED 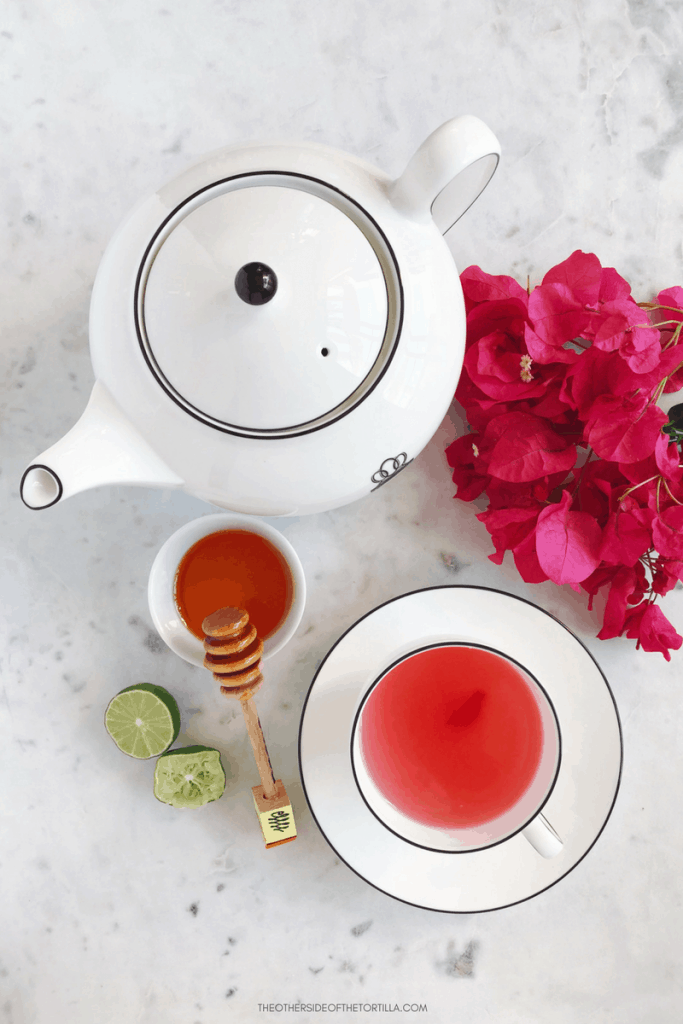 Years ago on a visit to Mexico City, my father-in-law taught me how to make this very effective Mexican home remedy for alleviating coughs and sore throats.

The recipe couldn’t be simpler: boil water and add the flowers until the water turns pink, then add Mexican lime juice (key limes) and honey. Some people like to add a little Mexican cinnamon stick to theirs as well, but I prefer my tea without it. Add slightly more honey if your throat is particularly sore….

END_OF_DOCUMENT_TOKEN_TO_BE_REPLACED 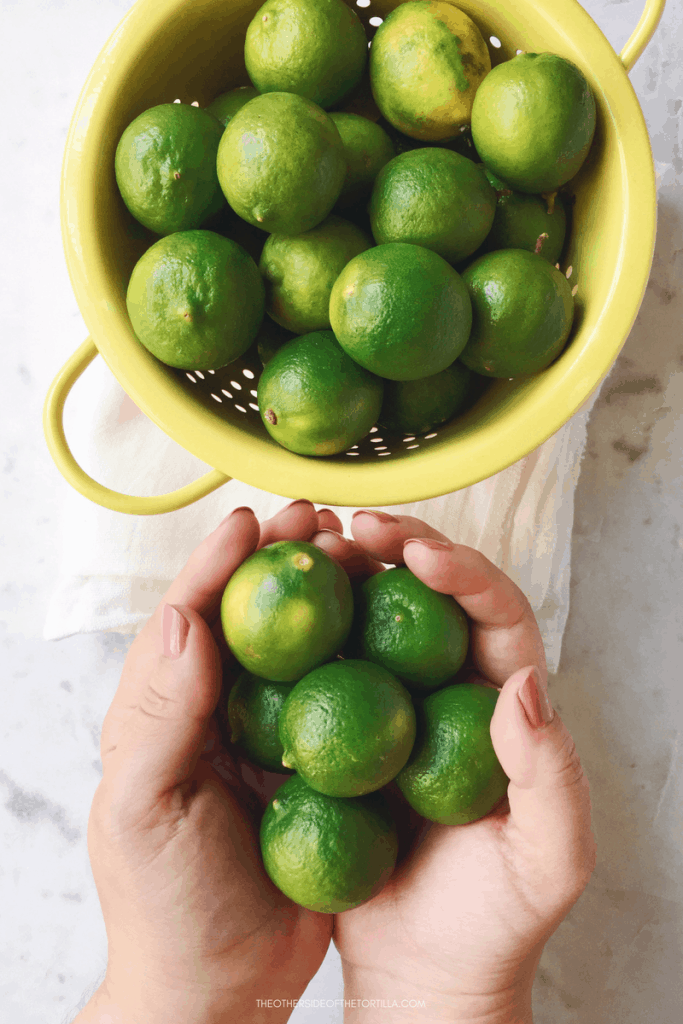 Known as limón grande or limón sin semilla, the larger Mexican limes do not have seeds….

END_OF_DOCUMENT_TOKEN_TO_BE_REPLACED

Guisados is a family-owned restaurant that serves tacos stuffed with homestyle braises such as tinga de pollo, chuleta en chile verde, and cochinita pibil, and is one of my favorite Mexican restaurants in LA.

The term “guisado” literally means “stewed” and usually follows a formula of meat (most typical are pork, beef or chicken) braised in a salsa made with chiles, tomatoes or tomatillos, spices and herbs, and sometimes vegetables. The type of chiles, spices and meat combinations used vary according to region and family recipes.

You really can’t go wrong with anything on the menu at Guisados. However, if you’re indecisive and want to try several kinds, the best deal is to order the sampler that comes with six small tacos.

Most everything on the regular menu at Guisados is gluten-free. (Ask servers about the specials, though—sometimes those contain gluten.) They also have some vegetarian options. If you’re vegan, they’ll make you a taco with sauteed bell peppers and onions if you ask.

The tortillas at Guisados are made fresh, by hand, every day at every location, too. They’ll sell you a half-dozen or dozen handmade tortillas to take home if you ask. They’re not cheap, but they’re damn good. A little on the thick side, but way better than grocery store tortillas for sure.

One of the things I really like about the servers at Guisados is that they always offer to tell you which tacos are which (especially if you order the sampler) when they deliver your order to your table. Although I eat there often enough to tell them apart without any help, the first time I ate there I thought it was a nice touch.

2-3 of the standard size tacos per person, or 1 sampler is usually sufficient for a meal.

My favorite taco at Guisados: Chicharrón

In fact, I like their version so much that I made tacos de chicharrón guisado at home to share the recipe here on the blog.

My meat-lovers’ taco picks at Guisados

The chuleta en chile verde is consistently good, but I don’t order it often because that’s something I make regularly at home. I don’t love their tinga, but that’s more of a personal flavor preference.

Hongos con cilantro (mushrooms, onions and cilantro, topped with a dollop of salsa verde and queso fresco) or calabacitas (squash, tomato, bell peppers, corn and onions, topped with a chipotle sour cream and queso fresco). The chiles toreados taco is also excellent but very spicy. Skip the frijoles con queso and get a quesadilla instead.

To drink at Guisados

Jamaica or Armando Palmero (2/3 jamaica and 1/3 agua de limón) are your best choices because they’re consistently good. Yes, they have horchata, but I don’t love the one they serve because it always has too much grit at the bottom of the cup. In my opinion, you can skip the horchata latte (iced coffee with horchata) and spend your money on another taco instead.

Also on the menu regularly (but not listed on the menu on their website), the tamales are worth exploring. My favorite is the the tamal de elote, but the chicken tamal with green chile is a close second.