José dangled the bag of pungent guavas right in her face. As if that wasn’t enough, he mocked her, making fake vomiting sounds. She ran upstairs and locked her bedroom door to escape the torture–her first mistake. After more than 20 years of experience, you’d think she’d learn to just roll over at the first hint of his big-brother shenanigans, ­but she always falls prey. Sometimes I’m convinced that the worse you get teased or tortured, the more he loves you.

But that’s not where it stopped. He decided to wait a day to both allow his sister to forget about the guavas and to allow them to ripen further to a rather stinky state. He waited until she wasn’t home and he hid several of them around her bedroom. Some were easy to find but others so impossible that no amount of looking on her part was going to yield treasure.

When she returned home and entered her room, she could almost immediately sense the smell. She hadn’t quite figured out how it got there until she came out of her room and saw José smirking. “¡Mamá!” she yelled — as if calling for my suegra’s help was going to solve the case — her second mistake.

As she began searching her room trying to figure out where the smell was coming from, she held a towel over her nose and mouth as if the smell was toxic. One under the bed. One in a pillowcase. She began to wretch. One behind a picture frame in her bookcase. By now, my suegra was helping with the search.  They found another and another. Finally, José relented and removed the remaining guavas — some from the closet and some from a chest of drawers in her adjacent bathroom. We all had a good laugh, hugs were exchanged, and the torture was forgotten.

Ever since then, guayaba jokes have been made at my cuñada’s expense any time they’re brought into the house. But she’s always been a good sport about it.

Lately, there’s been an abundance of good-looking guavas at my local market and I felt compelled to take some home and create something delicious with them. Lucky for me, no amount of torture by guayaba will send me running.

This recipe is adapted from one of my favorite Spanish-language cookbooks that I purchased in Mexico, Las Fiestas de Frida y Diego: Recuerdos y Recetas. It’s a beautifully written cookbook that has both recipes and the family history behind them. The book contains recipes from the cocina de la Casa Azul of Frida Kahlo and Diego Rivera and the book is co-written by Rivera’s daughter, Guadalupe.

This recipe is also often known as guayabas en almíbar in Spanish. This dessert pairs well with a cup of hot coffee. 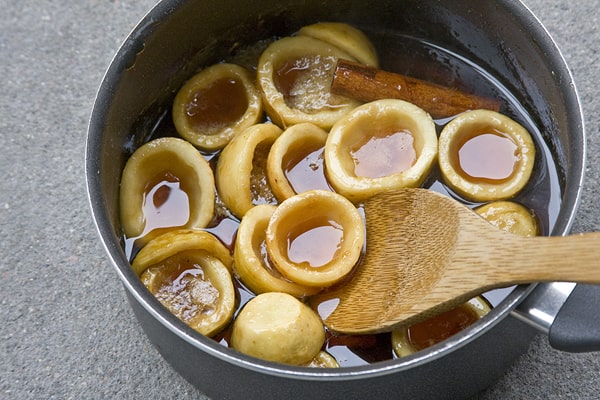 This traditional Mexican dessert of guavas in a cinnamon and piloncillo syrup is known in Spanish as guayabas en sancocho or guayabas en almíbar.