You are here: Home / Holidays / Christmas / How to make ponche navideño
725 shares

It’s not the holidays in Mexico without ponche navideño. This Mexican Christmas punch is served during las posadas, Nochebuena (Christmas Eve) and at holiday parties, and is often spiked with brandy or rum.

This recipe gives me such warm, fuzzy feelings and memories of being back in Mexico with our family for Christmas. Typically, this is a holiday punch, but in my house we sometimes drink it all winter long if we can find all the ingredients.

This recipe for ponche navideño comes from José’s abuelita Elda, who passed away in 2006.

While I never met Abuelita Elda, I’ve always felt like I had due to the abundance of stories I’ve heard about her and her cooking. My suegra taught me how to make her mom’s ponche recipe and someday I’ll teach my own children this holiday family favorite. I also learned that most families have their own recipe, so keep in mind this recipe isn’t the only way to make it. In fact, for a long time, nobody in our family knew that the secret ingredient in abuelita’s ponche navideño was Bonafina (a store-bought orange drink similar to Sunny Delight or Tampico Citrus Punch). 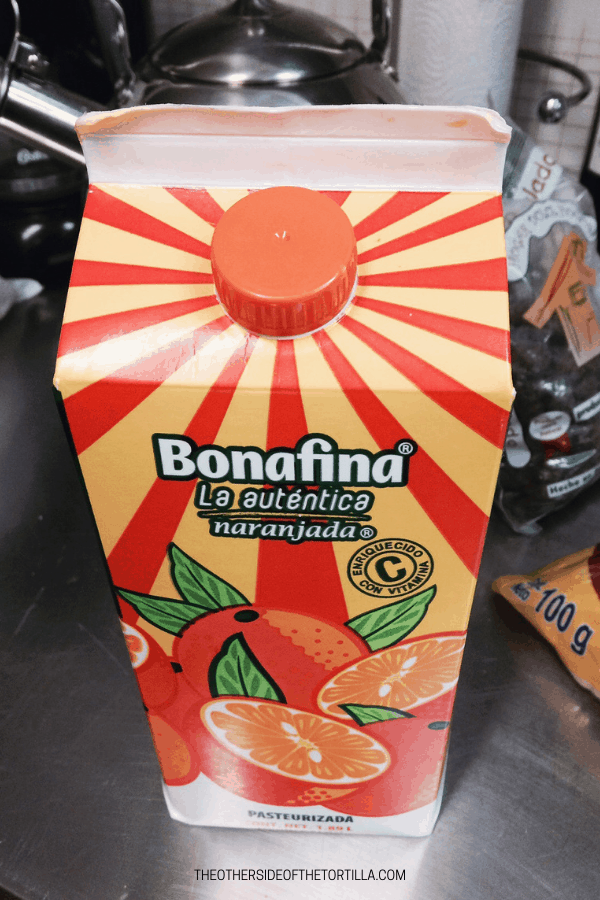 One thing I think everyone will agree upon, though, is there are some ingredients consistent in just about every recipe out there: Mexican guavas (guayabas), sugar cane (caña), Mexican hawthorn (tejocotes), cinnamon (canela), dried plums (ciruelas deshidratadas) and oranges (naranjas). How you put it all together is really up to you. Lots of people also use piloncillo to sweeten their ponche.

You might be wondering what some of the ingredients are and where to find them — specifically tejocotes. 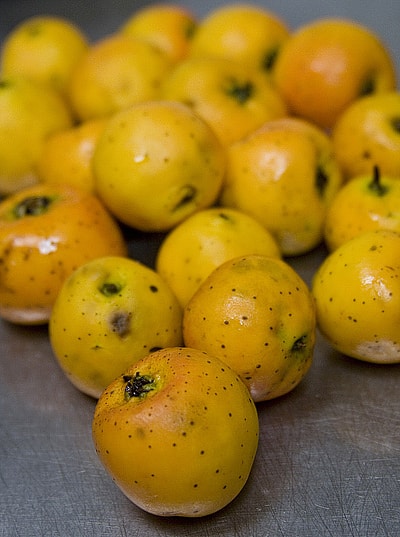 Tejocotes, also known as Mexican hawthorn in English, are part of the crab-apple family and have a tart taste with a hint of apricot flavor and a dense, pithy consistency when raw, somewhat similar to raw quince.

It’s a staple of Christmas posadas and is typically used in punches, jams and jellies.

If you live in California, you might be able to find locally-grown tejocotes at some markets, or even buy tejocote trees from a grower. Most Mexican supermarkets elsewhere should sell a ponche navideño mix in a glass jar and many have begun selling frozen tejocotes in the freezer section. Obviously, they’re not quite the same as if they were fresh, but they’ll do if you have no other way of obtaining the ingredients.

If you want to learn more about tejocotes, I recommend this December 2009 story from the LA Times.

Mexican guavas are the other ingredient you may not be able to find so easily. They have a yellowish skin that sometimes gets pink or purple-red spots when ripe, has creamy white flesh and a very pungent, tropical fruit smell. Though irradiated Mexican guavas have been USDA-approved since 2008, I sometimes have trouble finding them except at specialty produce stores or Mexican supermarkets. The more common pink-fleshed guava should not be substituted, as it has a different flavor.

Though some of the ingredients may be difficult to find, I promise it is worth the effort. I hope you enjoy this recipe as much as I do, and I hope you’ll share your memories or tips on how your family makes ponche navideño. 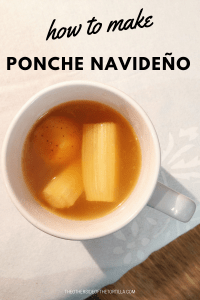 This Mexican Christmas punch, called ponche navideño, is served during Las Posadas, Nochebuena (Christmas Eve) and at holiday parties, and is often spiked with brandy or rum. It’s made with Mexican guavas, sugar cane, tejocotes, cinnamon, dried plums, and oranges.

If you let it sit overnight, just reheat and serve. After that (if there’s any left), store in an airtight container and refrigerate for up to 5 days.

Note: if you make this recipe using a ponche Navideño mix from a jar, I suggest you pour out most — if not all — of the syrup in the jar before adding the tejocotes, guayabas and caña to the pot. You may also want to add a few tablespoons of granulated cane sugar to help sweeten it. I also find that I prefer a couple extra cinnamon sticks for a more spiced flavor.