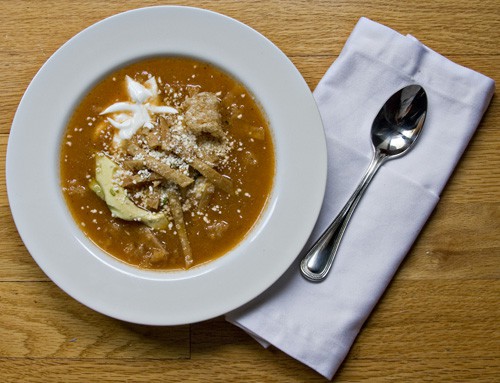 I love tortilla soup. I will order it just about anywhere, at any time of year, and I’ve been known to judge the entire menu of a restaurant solely on the quality of their sopa de tortilla. I’m obsessed in every sense of the word–and having not been able to find a version I deem delicious in Chicago, I learned how to make it.

This soup is very representative of a typical Mexican kitchen and uses the traditional flavors and textures of the tomato, chile, avocado, epazote and tortilla. I’ve never cared much for tomato-based soups or broths, but this soup converted me.

The secret, I’ve found, is adding a few crunchy little pieces of chicharrón (also known as pork rinds or cracklings here in the U.S.). They add a depth to the soup’s flavor that I’m convinced cannot be achieved otherwise. All of my favorite places in Mexico for tortilla soup serve it similarly; all the ingredients for assembling the soup are brought to the table separately and the waiter puts it together right in front of you, almost like a little show with your meal….

END_OF_DOCUMENT_TOKEN_TO_BE_REPLACED

I’m back from Cancun and finally starting to recover from the intense humidity–about 95 percent–and nursing some mosquito bites so nasty that it looks like I’m coming down with a case of the chicken pox.

But aside from the weather (Hurricane Ida couldn’t stop me) and some bugs, Cancun did not disappoint.

There’s something I just love about coconuts–and piña coladas don’t even begin to cover it. All over Cancun, I saw palm trees with coconuts growing on them. In some cases, I saw them ripe and brown and falling off the tree; in other instances I saw gardeners trimming the leaves and picking up broken coconuts that had fallen to the ground. To some, getting to see coconut trees is no big deal, but to a Chicagoan it was a little slice of heaven. How glorious to have these natural beauties growing in your front yard or on the side of the road near where you live. These are things I dream about during the long Chicago winters.

As I was only in Cancun for a few days and working when I wasn’t sleeping, I didn’t get much of a chance to explore local taco joints much to my chagrin. But I did eat a few noteworthy items and jotted down a few thoughts to share.

Sopa de lima, the quintessential Yucatecan dish, was undoubtedly the culinary highlight of my short trip. This version was the traditional broth with the addition of shredded chicken, strips of red bell pepper and nopales (also known as cactus paddle, and new to me as an ingredient of this soup), a generous floating slice of lime and a handful of perfectly crunchy tortilla strips which I promptly devoured before I even managed to take a photo.

I’m big on soups, and as my husband might also remind me, I’m big on lime juice even when it doesn’t technically belong there. I’ve never made sopa de lima at home; my first authentic taste of it was at El Faisan, a Yucatecan restaurant in Cuernavaca (a stone’s throw from Mexico City) about a year ago. Sopa de lima is simply a chicken stock-based soup with a lot less lime juice than you’d think neccesary in order to be called lime soup. A number of the recipes I’ve been studying include either serrano chiles or habaneros, and many have interesting spices like cloves or bay leaves and peppercorns in the preparation as well.

I’ll be experimenting with some sopa de lima recipes from Spanish-language cookbooks this winter, and when I find one that I think is worth sharing, I’ll let you know. I’m hoping to also get some more authentic sopa de lima taste-testing in when I travel to Cozumel soon. If you’ve got a good recipe, please get in touch and share so I can try it out. I’ve seen so many variations on the recipe that it almost makes my head spin when I think about it. Of course, I’ll be seeking advice and recipe suggestions from friends and family in Mexico when I make my annual December visit.

Other food notables from the trip: each day with breakfast, I ate chistorra, a notoriously fatty, delicious, fast-curing pork or pork/beef sausage not unlike chorizo (except for its size). The first night, I had a torta de cochinita pibil with an elegantly sliced avocado garnishing the plate, and as you can probably imagine, it didn’t take me too long to enjoy it–avocado and all.

I’d love to see any comments about your favorite Yucatecan foods as I’ll be headed back to the region in January.

I’m very excited to share that I’m on my way to the Yucatan Peninsula this morning… Cancún to be exact! I must admit, I was a little stressed about the weather over the weekend with Hurricane Ida passing over Cancún, but it seems to have passed and my flight is scheduled to leave on time.

It’s my first time visiting Cancún, and while I’ll be there on “official business” almost all week (photographing a wedding), I’ll also be scouting for local tacos and other Mexican delights to please my palate. Please share with me in the comments your favorite Yucatecan dishes–I plan to try some new things there and hope to come back with some ideas for recipes to tinker with in my kitchen!

I’ve had several questions about where certain Mexican cities are located in relation to each other over the last few weeks, so I know some of you will appreciate this little geography lesson. Cancún is at the northeast tip of the peninsula–and is far from the centrally located capital, Mexico City, from where I usually take most of my culinary influence here on The Other Side of The Tortilla.

Though Cancún is certainly a big tourist destination because of the beautiful beaches, there is much more to this region than beaches and resorts synonymous with spring-breakers. It’s rich with ancient ruins, cenotes, lush ecosystems and is abundant with remnants of pre-Hispanic civilizations.

I’ll be back at the end of the week with photos and stories to share.

I look forward to reading your comments about Cancún and the Yucatan Peninsula when I return! (And don’t forget next week is tortilla soup week.)

This recipe for homemade churros will have you excited that you don’t have to go all the way to Mexico anymore to get an authentic churro!

In the U.S., I’ve seen several different versions of churros. Make no mistake: none of them is very authentic. Some make my stomach churn at the thought (think theme park churros filled with chocolate or fruit-flavored goo), while others are passable for some quick cinnamon-sugar satisfaction during a desperate moment. It’s important to fry the pastry dough just right because if they’re over-fried, they’re just no good.

When José and I were still dating, I made my first trip to the legendary Churrería El Moro in Mexico City. Founded in 1935, this cultural culinary gem is more than just a 75-year-old churro depot. It’s an incredible experience. The storefront has a big glass window so you can watch the churros being made. That alone makes it worth the trip. In fact, even famous Chicago-based chef Rick Bayless is rumored to have stood outside El Moro for hours upon hours when planning the concept for his street food-inspired quick eatery, Xoco.

The waitresses at El Moro wear mustard-yellow diner uniforms with white trim and aprons. The blue, white and yellow patterned tiles, stained glass and yellow stucco walls inside are elements of any dream I have had dealing with churros ever since. (Yes, I dream about churros.) It’s all a part of the experience. With four types of hot chocolate to choose from and for the equivalent of a few dollars, you can’t go wrong when ordering churros y chocolate, especially in the chilly winter months. …

END_OF_DOCUMENT_TOKEN_TO_BE_REPLACED 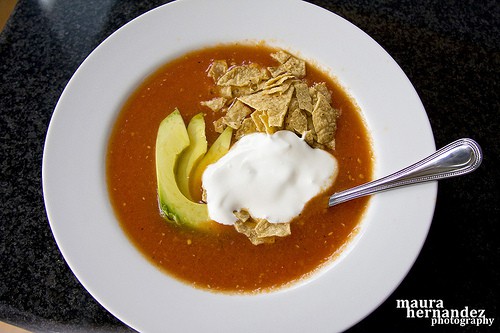 Though I’ve lived in Chicago most of my life, the chilly fall weather always seems to sneak up on me. Here we are in the middle of October and I’ve not made any tortilla soup yet! Those who know me will tell you: if I go to a restaurant with tortilla soup on the menu (even if it’s the middle of summer), I’ll order it. I’m serious about this soup, folks. I’ve been known to judge an entire restaurant solely on the quality of the tortilla soup they serve—no matter what else is on the menu.

The lack of tortilla soup in my house this far into October can only mean one thing: I’m about to go on a bender. So, I’m putting a call out. Send in your recipes and I will try each and every one I receive. The deadline to submit will be Friday, October 23rd and I’ll report back with both my recipe and my favorite recipe submitted by readers the week of November 15th.

I’ve got several favorite places in Mexico City where I go for tortilla soup and I’ll share those along with my recipe, too. You can submit your recipes here in the comments, or if you prefer, via email by clicking on the contact section to your right. There is one condition: your soup must be made from scratch with fresh ingredients (no canned soup bases) and should be based on tomatoes. I won’t try any recipe that isn’t based on tomatoes because then it wouldn’t be traditional tortilla soup.