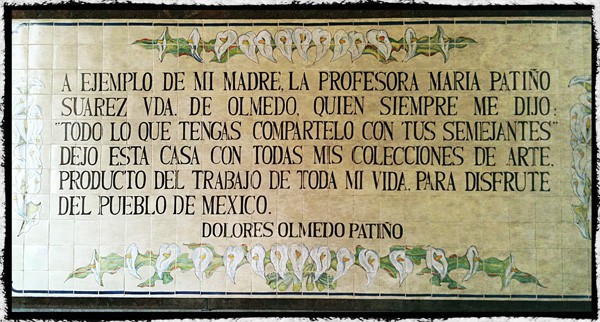 1. The Museo Dolores Olmedo is said to have the largest collection of Diego Rivera and Frida Kahlo works under one roof. If that’s not reason enough right there to visit, I don’t know what is. Any Frida or Diego-lover is bound to have an enchanting afternoon seeing all their works displayed on the walls of the hacienda. If you’ve already been to La Casa Azul and Anahuacalli, this is the natural third stop on your quest for all things Frida and Diego. 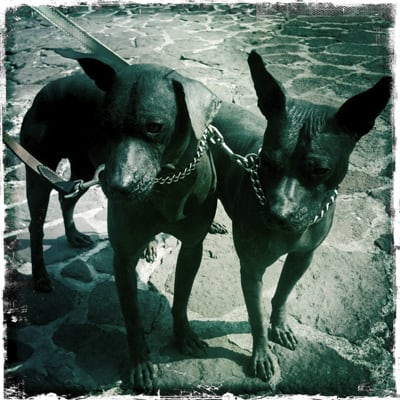 2. Olmedo had Xoloitzcuintle dogs, a pre-Hispanic breed also known in English as the Mexican hairless dog. According to interviews, the first Xolo she owned was a dog gifted to her by Diego Rivera. In fact, Frida and Diego not only owned Xoloitzcuintles, but also painted them into their works of art.

A breed revered for its loyalty and intelligence, it was also believed to have healing powers. The breed’s name comes from the words “Xolotl” (the name of an Aztec god) and “itzcuintli” (meaning dog). During my last visit, the dogs’ caretaker, Felipe Nava de Santiago, was walking two of the descendents from Olmedo’s dogs. He let us pet the dogs, which were very friendly and sweet, and told us the breed is especially beloved by those with arthritis—you only need to pet the dog to understand why; they have incredibly warm skin and some people have even used them as bed-warmers over the centuries. Nothing like snuggling up with your pup on a cold night! There are currently 10 Xolos and a new female puppy (born this year) that live at the museum.

Watch these videos from the Museo Dolores Olmedo for more about the care and temperament of Xoloitzcuintles as well as their presence in Mexican art.

3. There are numerous beautiful birds inhabiting the grounds of the museum. There are Guinea hens, ducks and geese, as well as several pavos reales (peacocks)! It seems everywhere you turn while you’re outdoors, you see a pavo real. If you’re lucky, you’ll get to see them spread their tails.

4. Get a guided tour with a trained docent (that’s art-speak for an expert guide). There are so many fantastic pieces of art and artifacts and you won’t want to miss a beat to learn about it all. The guided tours are offered Tuesday through Saturday, and require a reservation in advance but are well worth the effort and the minimal extra cost.

5. Aside from Frida Kahlo and Diego Rivera’s works, you’ll also find works by Russo-French painter Angelina Beloff, a companion of Rivera’s during his early years as a painter in Europe; Eastern World art such as ivory and Chinese cloisonné (raised enamel painted onto metal); her personal memorabilia such as photos and documents; popular art, artifacts, pottery and more. The wonderful thing about the quality and variety of art on exhibit is that the museum is small enough to view everything in one day’s visit but big enough that you know you’re visiting a world-class museum.

6. Check out the beautifully lush gardens around the grounds. You’lll spy bugambilias everywhere creeping over the walls, mandarin orange trees (pictured above), nochebuenas (pictured below), various native Mexican plants and the biggest maguey plants I’ve ever seen in an urban area. I’m not sure exactly how tall they were, but definitely more than 7 feet tall—this photo does not do them justice. Some of the flora you’ll see is only found in the Xochimilco area.

7. Architectural history! As I mentioned before, when Olmedo purchased the hacienda in the early 1960s it was in need of much restoration. According to the museum here’s the scoop of what they’ve got to offer:

The original outline and characteristics of the design have been preserved: tile roofs, sturdy hand-hewn wooden beams, reinforced brick and stone walls, clay and wooden floors, stuccoed walls and vaulted ceilings, as well as the buttresses typically used at the time, the decorative detail in the portals and the facade outlined in quarried limestone. 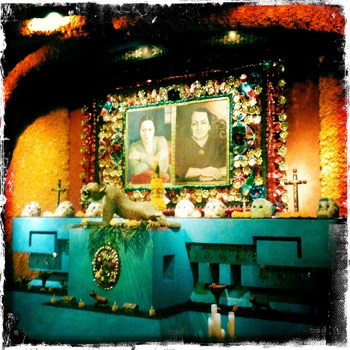 8. As is tradition at Casa Azul and Anahuacalli, the Museo Dolores Olmedo also has an ofrenda (pictured, right).

9. The gift shop! Stocked with all kinds of wonderful books and colorful popular art and folk art, you can’t leave without a souvenir. I wanted to buy about ten different books in the gift shop but only ended up with one because I knew I couldn’t fit them all in my suitcase. But don’t worry, I took photos of all the book jackets so I wouldn’t forget which ones I wanted.

10. The museum is very close by the famous and historic floating gardens of Xochimilco. Bring a picnic lunch, stroll the museum for a few hours and then take an hour-long ride down the canals on your favorite trajinera.