In just a few short weeks, I’ll be landing in Mexico City for the holidays (and as you may have guessed, the first thing I do after leaving the airport is make a stop for some tacos al pastor). I’m so excited that I’ve actually got a countdown clock going on my computer – only 24 more days!

On Twitter, there’s a great little hashtag party every Monday known as #MexMonday and it’s all about celebrating Mexico. I was delighted then while surfing the internet to get my daily fix of all things Mexican when I stumbled upon this cute little quiz on Chilango.com, my favorite magazine all about Mexico City. And for those of you who don’t know, Chilango is a slang word for people from Mexico City, much like how people from Chicago are called Chicagoans, people from New York are called New Yorkers and people from Los Angeles are called Angelenos.

It’s a 10-question quiz (en Español) called ¿Qué tan chilango eres? I was pretty proud of my score considering that I was born in the U.S. and am only an honorary Chilanga… And yes, I actually did know how many metro stations are in Mexico City. Blame it on my affinity for asking my suegro a million questions about usually useless random facts whenever we’re running errands together during my visits. Some things, you just don’t forget. 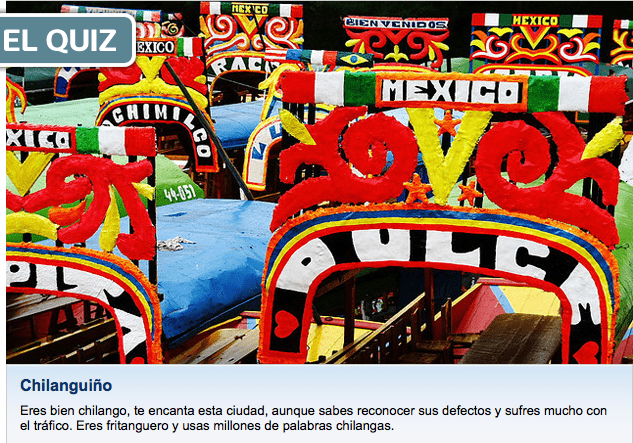