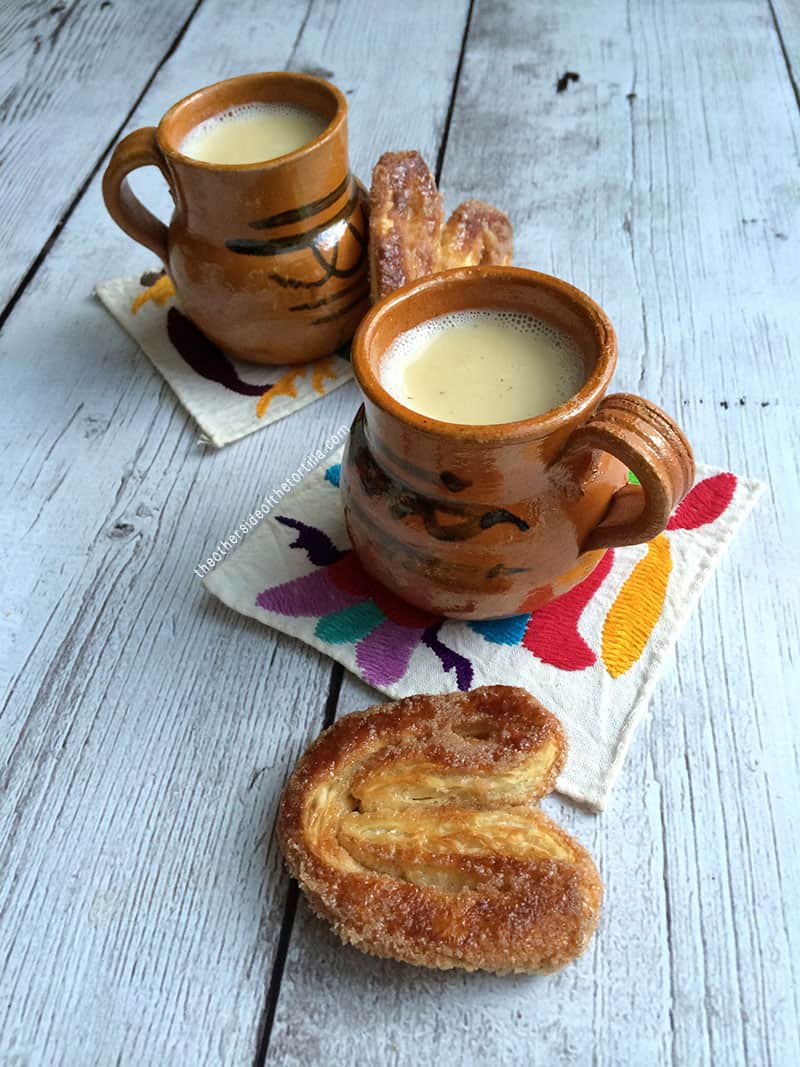 Atole de vainilla is a traditional masa-based beverage, often made with milk, and served hot. This hot beverage goes great with tamales, pastries or pan dulce and is also most popular around Day of the Dead and the holidays.

Atoles date back to pre-Columbian times in Mexico and are well-documented as a form of sustenance amongst the Aztec and Mayan cultures. Historical texts tell us the drink was often flavored with fruits, spices or chiles.

Vanilla, strawberry and chocolate are the most common flavors of atole nowadays, but you can sometimes also find mora (blackberry; one of my favorites), nuez (pecan), pineapple, elote (sweet corn), piñon (pine nut), and many other flavors. In some areas of Mexico, you can even find savory atoles—one made with with green chile is called chileatole.

Atoles can be made with different kinds of corn, as well: white, yellow and even blue corn can be used. And in some recipes, water or nut milk can be substituted for dairy milk.

Many Mexican markets sell store-bought atole packets that are thickened with cornstarch and take just a few minutes to make, but making your own atole from scratch with Maseca instant corn flour is so easy you’ll never want to buy one of those store-bought envelopes again. This version gives you all of the taste of atole made from scratch without having to grind your own nixtamal and turn it into masa, and then dissolve it in cheesecloth.

Depending on how sweet you like the atole, you can add three to four ounces of piloncillo. If you find that four ounces is too sweet, you can dilute the atole with another half-cup of milk.

This recipe is gluten-free and vegetarian-friendly.

Atole de vainilla is a traditional masa-based hot beverage, popular during the holidays, and made with milk, piloncillo, vanilla bean and Mexican cinnamon.

Get more ideas for recipes made with Maseca at mimaseca.com.