Pan de muerto is a yeasted sweet bread perfumed with orange blossom water or orange zest and dusted with a sugar topping. This pan dulce is typically eaten to celebrate Day of the Dead and is also given as an offering on altars for Día de los Muertos.

In fact, the most common offering on an altar for Día de los Muertos, aka Day of the Dead, is pan de muerto (literally: “bread of the dead”). Alongside other items included in the ofrenda, the bread is intended to honor the souls of our loved ones who return to visit us and give them nourishment. Other items on the altar may include food and drinks loved by the deceased, trinkets and other symbolic offerings such as marigold flowers (known in Spanish as cempazuchitl), sugar skulls, papel picado, candles and more. You can read more about the symbolic elements of the altar in my post about How to Celebrate Day of The Dead. This holiday is celebrated on November 2, known to Catholics as All Souls’ Day.

Pan de muerto represents an earthly gift and the generosity of the host. The bread dough contains orange blossom water and is often topped with sugar or sesame seeds, depending on the region of Mexico. The dough decorating the top represents bones.

Depending on the region of Mexico you visit this time of year, you may notice that there are other forms this bread can take such as little people, dolls or half-moons. The traditional shape is round with the dough arranged on the top to represent bones. The dough ingredients may also vary slightly according to region, sometimes containing anise seeds or orange zest. In Mexico City, the sugar topping is the most popular. Some areas of Mexico use pink or red sugar, but the most common is plain, uncolored sugar.

In the past, it was common for pan de muerto to be sold in panaderías only a few days prior to Día de los Muertos, but with the growing interest in the holiday outside of Mexico and modern supply and demand marketing, you’re likely to see pan de muerto in grocery stores and some bakeries in Mexico City as early as late August and early September. Even for those who don’t actually celebrate the holiday, it’s common to buy pan de muerto to consume this time of year.

The pan de muerto form you see pictured here is the most common you’ll find in Mexico City; the round base represents a grave mound covering the coffin, the dough shaped like bones represents the arms and legs, and the ball of dough on top represents the skull. The bread itself is made from the same masa bizcocho dough that is used to make conchas, roles de canela, pan de anís, novias, chilindrinas, rebanadas and other similar types of Mexican pan dulce.

In Oaxaca, the base of pan de muerto is made with their traditional pan de yema, and is sometimes adorned with sesame seeds. In other areas of Mexico, this bread carries other names and has more elaborate decoration as well.

This recipe can make 6 small individual rolls, 4 medium individual rolls, or 2 large pan de muerto breads for sharing with up to 4 people. If you want to make this recipe as one large bread, you may need to adjust the baking time by adding a few minutes.

END_OF_DOCUMENT_TOKEN_TO_BE_REPLACED

Día de los Muertos was this past week and as a special treat, I’ve asked some of my friends to send me photos and descriptions of their altars to share here on The Other Side of The Tortilla to show the variety of ways that people celebrate this holiday.

Today, I’m sharing the altar of my friend Nicole Presley from Presley’s Pantry.

Where in Mexico are your family’s roots?
My family is from Juarez- Chihuahua, and Tijuana. A mixed-bag of Mexican border towns.

Who does your altar honor?
My altar honors my uncle Robert. He’s the first person in my immediate family to pass on. His death strongly impacted all my living loved ones. We miss him dearly and hope that he appreciates his offerings. It also honors my fiance’s father Alfonso, who passed two years ago.

Any special ofrendas or items on your altar?
I always put a shot of Vodka on the alter for my uncle. He loved having a good time and vodka was his drink of choice. Since he was a figurine artist, I make sure to include one of his pieces of work. His daughter is also a great artist and I include one of her pieces on his altar, knowing he would be so proud of her accomplishments as an artist. For Alfonso, I include coins and cookies. He had a huge coin collection in his days on this earth and they were one of the things that made him the happiest.

Why do you make an altar for Día de los Muertos? How does it keep your connected to Mexican culture?
I make my alter in remembrance of my Tio. A way to celebrate his life and hope that where ever he is now he is able to know that we love him and miss him. And if all else fails…. At least he can enjoy his vodka. Then a few years ago when my fiances father passed, we started to celebrate his life through the alter as well. On November 2nd we play music all day long to celebrate this honorable men.
For more photos and a story from Nicole about celebrating Día de los Muertos in Los Angeles and a recipe for pan de muerto, click here to go over to Presley’s Pantry.

Day of the Dead (aka Día de los Muertos) is a holiday celebrated in Mexico, the changing landscape of the United States means that a lot more people are celebrating outside of Mexico, too.

According to a study released in 2012 by the Pew Hispanic Center about Hispanic origin profiles of those living in the United States (whether U.S. born or foreign born), people with Mexican ancestry or who are Mexican by birth make up nearly 65 percent of all Hispanics in the U.S.

In 2013, a third of Mexicans in the United States were foreign-born, while 42 percent of immigrants from Mexico have been in the U.S. for more than 20 years. About 26 percent of Mexican immigrants were U.S. citizens.

Of course, this makes me happy because it means there are a lot of people like us who are looking to stay connected to their heritage whether by food, culture or traveling to Mexico (or at least reading about it). Here’s a guide with information on who celebrates this holiday in the United States, and how they celebrate it.

END_OF_DOCUMENT_TOKEN_TO_BE_REPLACED

Today is Día de los Muertos, a day to celebrate the lives of our deceased loved ones. It is believed that on this day, the souls of the dead can travel back to earth to be with us. Leaving an altar with an offering for the souls ensures that they will find their way home.

I thought I’d share with you the altar that we made in honor of our family members who have passed away.

The altar includes flowers, religious candles, fruit, tequila, lime and salt, obleas con cajeta, water, dulce de guayaba cristalizada, a miniature tortilla press and molcajete, dolls my Dad brought me from a trip to Mexico when I was a little girl, pan de muerto, a pillow, colorful striped fabric, papel picado brought all the way from Mexico City and a handmade carpeta de encaje (ornamental lace). Confession: I ate the pepitorias that I made for the altar last night before I got the chance to photograph it, I just couldn’t resist.

I was interested in how others around the world constructed their altars and what they looked like so I curated a project you’ll see below. I asked friends, family and strangers on Facebook and Twitter to submit photos of their altars to share here on The Tortilla. I’ll continue to add items to the curated project over the next few days as I continue to receive more photos.

Here are a few more details from our altar in honor of José’s grandparents, my grandparents, and other family members who have passed away, including my uncle who was killed in an accident earlier this year. May their souls rest in peace.

View the entire album of our altar by clicking on the thumbnails: 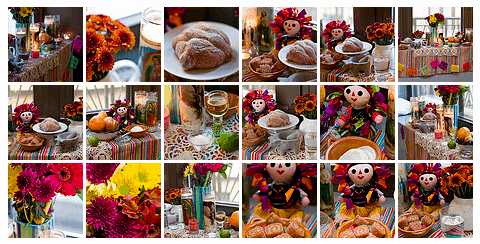 Thank you to everyone who allowed me to share their photos for this curated project. I spent the last few days searching and collecting items posted on Twitter that contributed to it. I hope you enjoy looking at all the photos as much as I did.

Last but not least, muchas felicidades to Marcela from Culture Mami, who won our apron giveaway from last week! I look forward to seeing photos of you wearing your calavera-print apron made by Lisa Renata. 🙂