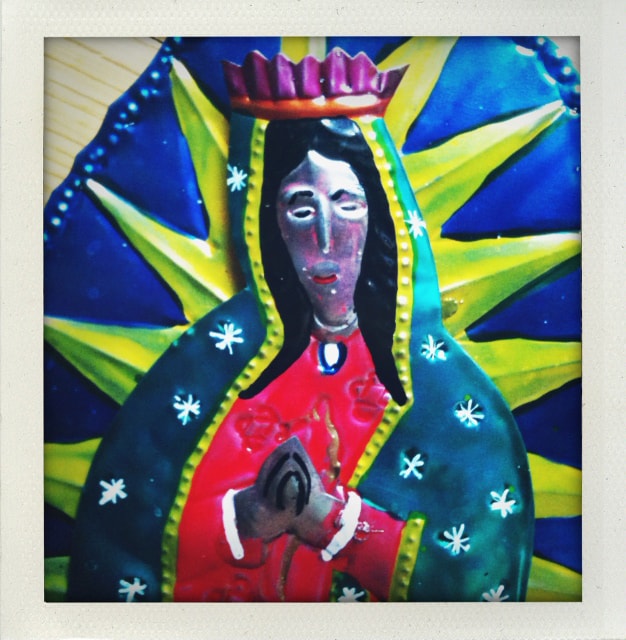 In the 1730s, La Virgen (also sometimes referred to as La Morenita) was adopted as the patroness of Mexico City. This is why her image can be found just about everywhere—from churches to market stalls to homes and even on quirky trinkets. She is beloved by all and today, the basilica in Mexico City is one of the most-visited Catholic shrines in the world. She is credited for performing many miracles to those who pray to her to watch over them.

The original basilica, La Antigua Basílica de Santa María de Guadalupe, was consecrated in 1709 but became too dangerous to continue inhabiting due to a sinking foundation, as so many buildings in Mexico City have experienced. It was closed in 1976 for conservation and was reopened in 2000. The new basilica, the one that everyone recognizes with the circular floor plan and sweeping roof, was consecrated in 1976. It’s here that the tilma with the image of La Virgen de Guadalupe lives, high up on the wall so that everyone can see her from any point in the sanctuary—a space that can accommodate up to 50,000 people when including the chapels.

Located in the north of Mexico City, millions of people actually come visit the basilica year-round but the busiest times of the year are Semana Santa and December 12, the feast day of La Virgen de Guadalupe. There are typically 16 misas per day at the main altar, and there are additional worship services held in the basilica’s internal chapels and a crypt. More services are held at other sanctuaries surrounding the basilica. I have yet to attend a mass at the basilica, but it’s on my bucket list to do in the coming year.

In 2009, I was lucky enough to be in Mexico City on December 12, and it was an incredible sight. People travel from all over the country to the basilica to honor La Virgen, some even crawling on their knees—an intense and often painful sacrifice to show their dedication, love and respect.

I have a very clear memory of sitting at my desk writing on the morning of December 12, 2009, when all of a sudden, I could hear in the distance the sound of the people singing. They were walking in the streets, riding bicycles and driving in cars, and everyone had a sign, image or something with a picture of La Virgen on it. I have no idea where they were coming from originally, except that they came from south of Coyoacán, where I was. The closer they got, I could hear that they were singing Las Mañanitas! I ran up to the roof to hear them better and sat up there for about a half hour just listening and watching people pass along the closest main street, Miguel Ángel de Quevedo, which I could partially see from the rooftop. It was very spiritual and like nothing I’ve ever experienced.

Here’s a video I found on YouTube from 2010 that shows the peregrinos (pilgrims) coming from near and far to participate in mass and leave offerings for La Virgen at La Nueva Basílica de Santa María de Guadalupe. The video includes interviews with some of the peregrinos. It’s in Spanish, but you don’t need to understand what’s being said to see the profound faith and dedication of the people who come from far away to be there on December 12 to pay homage.