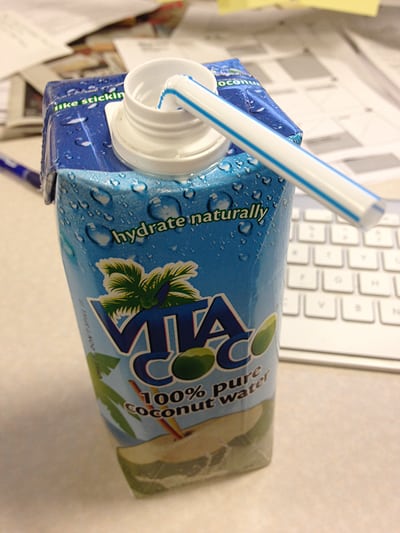 I love fresh agua de coco and it’s relatively easy to find in many parts of Mexico. In Chicago, though, it’s less accessible (read: almost impossible to find).

So, I have a love-hate relationship with buying agua de coco in the store when I’m really craving it. On one hand, I’m grateful I can get it at all. But on the other hand, the dilemma for me is twofold: the mass-produced version lacks the same taste as the fresh kind—obviously—but also has a much, much higher price tag.

I’ve even gone so far as to throw away the receipt after buying it because I felt bad about how much I spent (…and maybe because I didn’t want the Mr. to know how much it actually cost).

But on several occasions, I’ve caved and bought a single serve juice box (like the one pictured here) to take with me to the office. Or if I see it on sale, I’ll sometimes buy two regular-sized tetra packs and treat myself.

I can’t help but wonder if I’m the only one who is subconsciously chastising myself for buying it, though. When we traveled through the Carribbean, South and Central America and Mexico on a family vacation in 2009 and we saw stands along the road offering fresh agua de coco all over the place—often for less than the equivalent of a single U.S. dollar—those images stuck in my head. I remember thinking, “if they only knew what we paid for this back home.” And those images stuck with me; they flash in my mind each time I pick up a tetra pack off the shelf at the grocery store and most of the time, I end up putting it back.

According to an article in the Wall Street Journal from earlier this year, some industry estimates say U.S. retail sales for coconut water reached around $400 million in 2011. Furthermore, the industry has roughly doubled its revenue every year since 2005, largely due to endorsements and consumption by celebrities and athletes. Something about it seems exploitative to me.

Mexicans (and others throughout Latin America) have been drinking coconut water since long before it was deemed cool by the U.S., but it’s considered a luxury product here and comes with a luxury product price tag. When I have kids, I’m sure I’ll much prefer giving them natural juices and things like coconut water over sugary drinks, but I feel guilty about the cost. I know even if I make the personal choice not to buy it, that many others still will.

I dislike the term “New Year’s Resolution,” mostly because it’s so often synonymous with failure for many people – myself included. Whether it’s exercising more, eating healthier or trying to have more patience in certain situations, sometime we set ourselves up for failure because we’re not really committed to doing these things. Instead I prefer to use the term “lifestyle change” because I feel like there’s a little less pressure and though it has grand aspirations like a new year’s resolution with hopes you’ll stick to your changes, it somehow seems more manageable to implement over time, little by little. Nobody changes overnight and I’m trying to be realistic with my organizational goals.

I made this silly video to talk about one of my lifestyle-changing decisions for 2011: cleaning my cabinets and getting organized. Though you might think I have the perfect, organized kitchen, I admit I’m human. This year, I’ve resolved to make a change, though. I just can’t live with a messy kitchen the way I used to. When I was single and lived alone, I could leave dirty dishes in the sink for days without feeling any shame about it. But not anymore. The cabinets are what has finally gotten to me. …