Frijoles de la olla are a staple in Central Mexican cuisine. Traditionally, they’re cooked in a clay pot, but this version is adapted for cooking in a slow-cooker or Crock-Pot.

There are three types of beans you typically see in frijoles de la olla recipes: frijoles bayos, flor de mayo or pinto beans. Frijoles de la olla made with those type of beans are most common in Central Mexico. All three varieties have a pinkish hue, with pinto beans being the lightest in color among them. These are also the same kind of beans I use for making frijoles charros.

While individual recipes for frijoles de la olla may vary, they will also often include common ingredients such as onion, garlic, manteca de cerdo (pork lard), salt and hierbas de olor (herbs such as epazote or cilantro that are cooked in with the beans for flavor). Other variations may include different spices such as cumin or bay leaves.

In Eastern Mexican states such as Veracruz and others bordering the Gulf of Mexico, as well as the South and Southeast states of the country such as Oaxaca, black beans are preferred over bayo, flor de mayo or pinto varieties. Accompaniments may also vary by region to include a fresh squeeze of lime juice, diced onion, chile serrano, chopped cilantro or crumbled fresh cheese.

If you’re planning to let this cook all day while you’re not home, use a slow-cooker that has a timer that will turn the heat off or to a very low “keep warm” setting after the cooking time. You can then add the salt, reheat them for 30-60 minutes in the slow-cooker and enjoy!

If you don’t have a guajillo chile at home but you have other dried chiles, any other dried red chile you like and have on hand is an acceptable substitute. Just be sure to portion based on the heat factor! Or you can leave the chile out altogether if you prefer.

For those who like their beans with a thicker stew-like consistency instead of broth, some cooks mash or blend a portion of the beans and then re-add to the pot as the broth cooks down.

To make this dish vegetarian-friendly, leave out the pork neck bones and use vegetable broth instead of chicken broth.

This recipe will give you plenty of leftovers, and it’s great as a snack, a side dish, or even a main dish with some garnishes and mix-ins.

Frijoles de la olla are a staple in Mexican cuisine. Traditionally, they’re cooked in a clay pot over a fire or on the stove, but this version is adapted for cooking in a slow-cooker or Crock-Pot.

The beans should be soft to bite and have a nice broth when they’re finished, but shouldn’t be watery.

Store leftovers in an airtight container in the refrigerator for up to a week.

Cochinita pibil is a traditional dish from the state of Yucatán that’s cooked in an oven made inside a hole in the ground (called a pib). But did you know you can make a really good version of this dish in a slow-cooker?

When I found out that January was National Slow-Cooking Month, I knew exactly what recipe I was going to adapt for Crock-Pot cooking. I’ve always wanted to test my theory that cochinita pibil can be done in a slow-cooker, so the fact that it was a nationally recognized month-long culinary holiday-of-sorts was the perfect chance to take on the challenge. 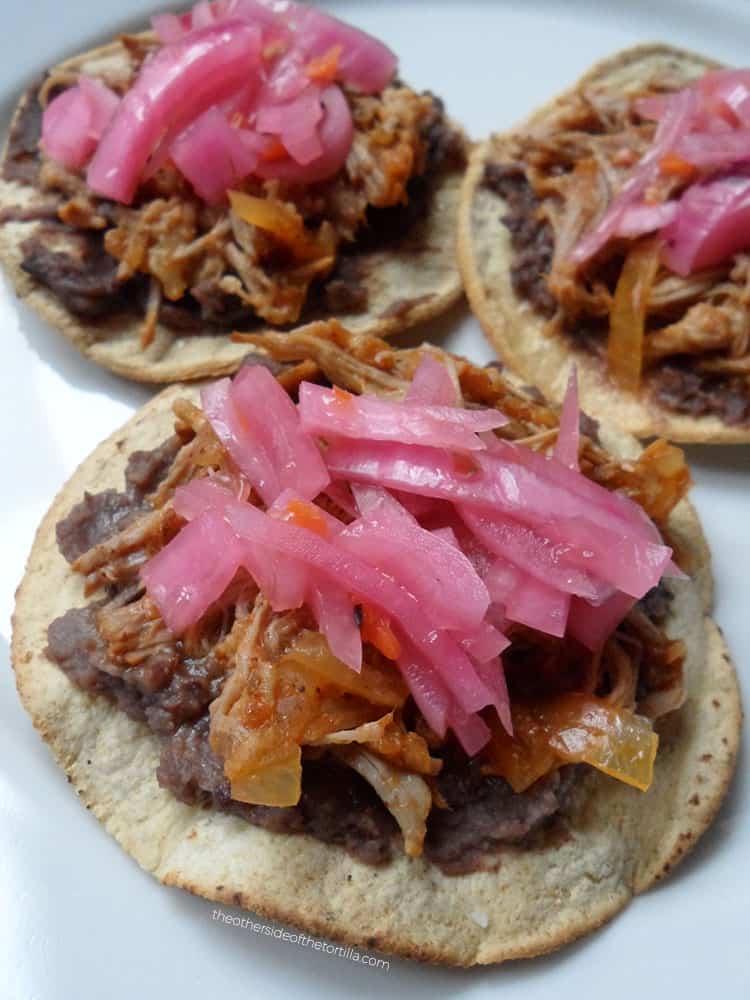 Yes, we’ve posted a recipe here before for cochinita, but let me tell you why this one is different. We’re using a different cut of meat (boneless country-style pork ribs), an easy spice mix made from scratch (no achiote paste in brick-form here), and as with most slow-cooker recipes, you can set it and forget it, making it relatively hassle-free compared to the traditional method of making cochinita pibil.

If you’re making it for guests, you can still serve it wrapped in warm banana leaves to impress them. Just check out our original recipe for cochinita pibil for directions on how to heat the banana leaves so they’re pliable.

This dish can also be served as panuchos by putting the refried black beans inside little tortillas, frying before adding the meat, salsa and any garnishes on top, but trust me when I say store-bought tostadas are going to save you a lot of time. Plus, this recipe is a bit healthier because we’re leaving the frying out. If you can’t find small tostadas or picaditas at your grocery store, you can make your own by either heating corn tortillas in the oven until they’re dry and crispy, or you can get the same result by cooking them longer on your comal.

But before we move on to the recipe, let’s talk a little about what a slow-cooker (or Crock-Pot) actually is so there’s no confusion because I often get asked if a slow cooker is the same as a pressure cooker. (The answer is no. In fact, they’re opposites.) A slow-cooker is a counter-top electric device that you plug in and usually has a removable glazed ceramic or porcelain pot, surrounded by a heat-conducting housing. They typically have two cooking settings: low or high, and a keep warm setting. Some of the more expensive slow-cookers have more options for controlling the heat as well as a timer with an automatic-shut off.

The point of a slow cooker is to cook things with steady low, moist heat which makes it ideal for soups, stews and cooking meats that you want to be fork-tender, but without all the fuss of watching it constantly. The lid of the slow cooker typically has a small vent in order to let some of the steam escape and can be removed during the cooking process to stir the ingredients if needed.

So now that you know the difference, let’s get slow-cooking. 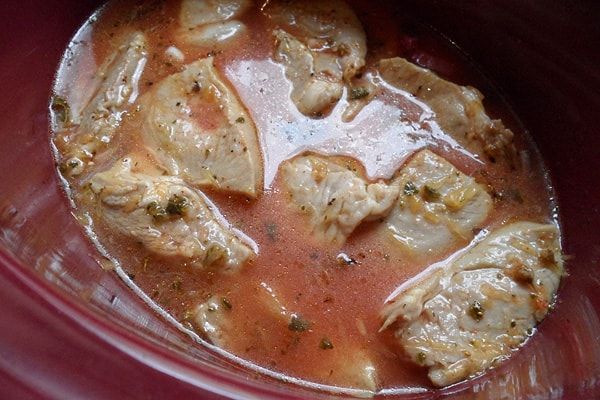 Use your Crock-Pot or slow-cooker for a no-fuss, easy-cleanup variation of a classic Yucatan favorite, cochinita pibil. Tip: Serve on mini tostadas for a perfect party-treat!