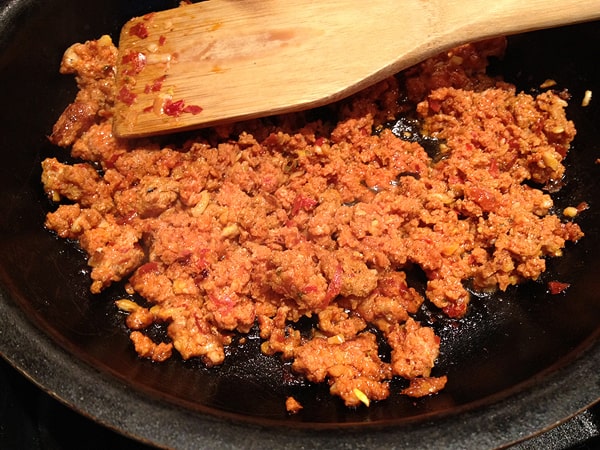 Frijoles de la olla are a staple in Central Mexican cuisine. Traditionally, they’re cooked in a clay pot, but this version is adapted for cooking in a slow-cooker or Crock-Pot.

There are three types of beans you typically see in frijoles de la olla recipes: frijoles bayos, flor de mayo or pinto beans. Frijoles de la olla made with those type of beans are most common in Central Mexico. All three varieties have a pinkish hue, with pinto beans being the lightest in color among them. These are also the same kind of beans I use for making frijoles charros.

While individual recipes for frijoles de la olla may vary, they will also often include common ingredients such as onion, garlic, manteca de cerdo (pork lard), salt and hierbas de olor (herbs such as epazote or cilantro that are cooked in with the beans for flavor). Other variations may include different spices such as cumin or bay leaves.

In Eastern Mexican states such as Veracruz and others bordering the Gulf of Mexico, as well as the South and Southeast states of the country such as Oaxaca, black beans are preferred over bayo, flor de mayo or pinto varieties. Accompaniments may also vary by region to include a fresh squeeze of lime juice, diced onion, chile serrano, chopped cilantro or crumbled fresh cheese.

If you’re planning to let this cook all day while you’re not home, use a slow-cooker that has a timer that will turn the heat off or to a very low “keep warm” setting after the cooking time. You can then add the salt, reheat them for 30-60 minutes in the slow-cooker and enjoy!

If you don’t have a guajillo chile at home but you have other dried chiles, any other dried red chile you like and have on hand is an acceptable substitute. Just be sure to portion based on the heat factor! Or you can leave the chile out altogether if you prefer.

For those who like their beans with a thicker stew-like consistency instead of broth, some cooks mash or blend a portion of the beans and then re-add to the pot as the broth cooks down.

To make this dish vegetarian-friendly, leave out the pork neck bones and use vegetable broth instead of chicken broth.

This recipe will give you plenty of leftovers, and it’s great as a snack, a side dish, or even a main dish with some garnishes and mix-ins.

Frijoles de la olla are a staple in Mexican cuisine. Traditionally, they’re cooked in a clay pot over a fire or on the stove, but this version is adapted for cooking in a slow-cooker or Crock-Pot.

The beans should be soft to bite and have a nice broth when they’re finished, but shouldn’t be watery.

Store leftovers in an airtight container in the refrigerator for up to a week.