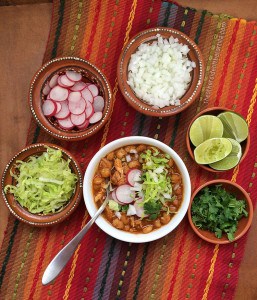 Pozole rojo is a classic Mexican soup or stew, traditionally made with pork broth, pork, hominy, and spices, then topped with garnishes such as lime juice, radishes, onion, lettuce and more. It's a popular traditional dish served throughout the country that is representative of Mexican cuisine.

Serve with tostadas and crema mexicana.

Recipe by The Other Side of the Tortilla at https://theothersideofthetortilla.com/2015/10/slow-cooker-pozole-rojo-recipe/